Now, this is how my Saturday looks like, if you want to know. Princess style? Puh-leeese. Slave style got la.

Hubby works on Saturday, many should know by now already. G wakes up as early as 6am! And that means, I can't do anything much, as he is a sticky baby and will require me to be by his side at all times. Kz wakes up about 7.30am usually. Both will have their bath around 8am, then it's breakfast. Porridge for both of them (which I cook at 5am). Kz hates porridge, but I manage to force him to finish the porridge with bribery (not gonna mention what kind of bribes as health freaks will condemn me here). Out of convenience, I feed both of them the same porridge so that I do not have to prepare separate breakfast for Kz.

Nap time for G around 9am, while Kz glues himself to the TV and YouTube.
*Note: Don't condemn me, I have to do this, else, I can't do any chores.

Lunch for both around 11.30am. The same porridge for G, and noodles (cooked with stored-soup-in-jars) for Kz.

Noodles cooked with (leftover) soup stored in jars, vegetables, assorted balls and an egg. I do this almost every weekend and so far, Kz has nothing to complain and would gladly eat it. I boil my soup one day in advance, on Friday, then store them in jars, and (make it a point - must) finish them on Sundays. Afterall, leftover food is not good for health, but out of convenience, had to do it. I will have no time to prepare lunch if I hadn't prepared the stored-soup-in-jars earlier.

A few noodle-meals to share using my stored-soup-in-jars. Kz loves these, and would (usually) finish (almost) all of it. 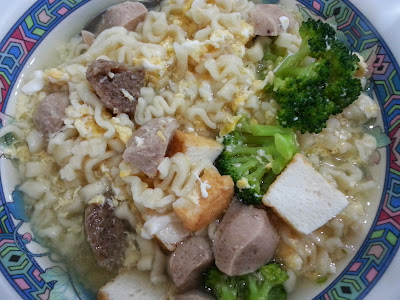 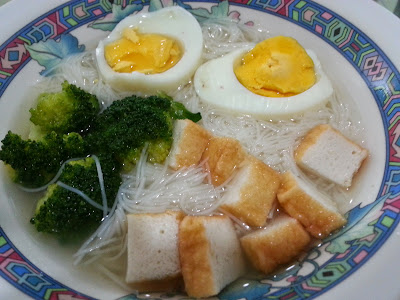 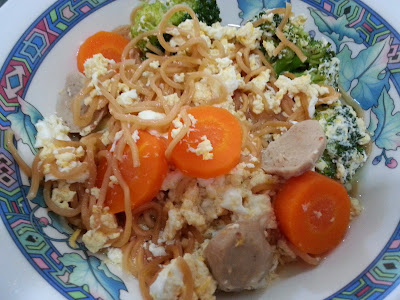 Then, nap time for both G and Kz around 1pm.

Hubby comes back around 2pm.

Then it's the usual routine - going to the supermarket to shop for groceries, then to the MIL's place for dinner. My life boring?

Oh, here's me, with G in the kangaroo pouch. Nooooo, you really think it's called a kangaroo pouch? Duh. It's called babywearing la ~ carrier. I use the carrier now instead of the bulky stroller, works ok with me. 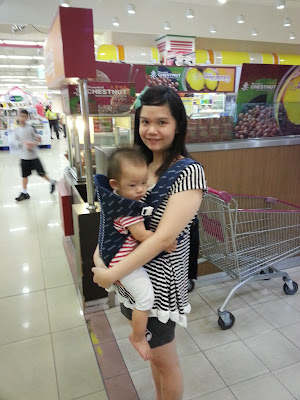 Posted by Princess Ribbon at 08:16