Those who know me should already know that I would be sending Kenzie to stay with my parents starting next year and we can only bring him back to stay with us during the weekends, and then, back to my parent's place again on Sunday evenings.

Because of this, I am having sleepless nights. Not to mention how many times I cried too.

I am actually very reluctant to let go of my boy and only see him during the weekends. I am ready to make sacrifices, which include resigning from my job (and find something nearer to home) so that I can still fetch Kenzie around and not be separated from me.

God then showed a way.

Previously, I did not choose the kindergarden (let's just call it Kindy K) which is just nearby my house because of the morning timing. They operate from 8am onwards. School time would be from 8am-12pm. Daycare starts from 12pm-7pm. But the problem is, the hubs and I need to leave the house by 6.45am every morning because of the distance+location+traffic problem. Nobody was willing to take in my kid and open the door for us at 7am. The earliest they offer is 7.30am. I checked. I called. I asked.

But the day before yesterday, I didn't know why, I called the principle of Kindy K again (I first called her about half a year ago, but Kenzie was too young then to be enrolled). We chatted and I told her my problem.
She suggested to me. Why not:
1) "Transit" Kenzie at the current nursery at our usual time, meaning 6.45am (which is located just downstairs of our condo), and she will pick him up at 7.30am to bring to her kindy (meaning Kenzie waits at the nursery every morning for about 45 minutes). A small fee will be charged for this I am sure.
or
2) Send Kenzie to baby G's nanny (I send baby G down to the nanny's at 6.30am daily and then, go to work right away), let him stay there for about an hour, she will come to the nanny's house to pick him up at 7.30am and bring him to the kindergarden (in this case, I do not have to pay for Option # 1)

Long story cut short, we went to Kindy K to see the principle yesterday and we have decided to send Kenzie here because I didn't want to be separated from Kenzie. I am happy that God made a way for me when there seemed to be no way.

Fees is still not cheap though, have a look. 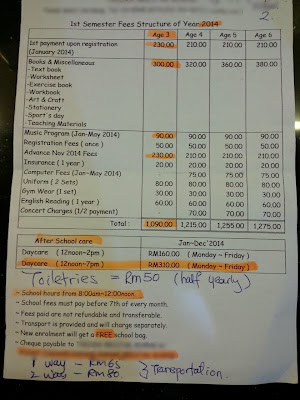 I don't like to reveal too much or personal stuffs in my blog, but look at what the grandma said last night. Grandma hung up on my call too. She made me feel like I am doing a very wrong thing and not good enough for my kid. 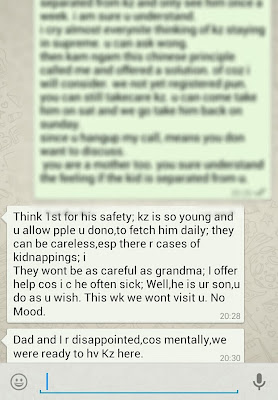 Posted by Princess Ribbon at 08:31