Million is my parents' dog. A miniature poodle. Million has been with us for the past 11 years. In dog years, he is already 77 years old, older than my dad. Mum says Million has arthritis now and could not jump or run as fast as he used to. He used to jump on top of the couch to rest (yes, his sleeping place is on the couch), but nowadays, he could not jump onto it anymore. So he whines, and my mum would carry him up to the couch. Poor thing. His eye sight is getting bad too, as he has cataract on both eyes. My parents treat Million as their son and when Million has pee-ed or poo-ed, mum would say to dad, "Your son has poo-ed". But Million's appetite is still good tho' and is still eating a lot. 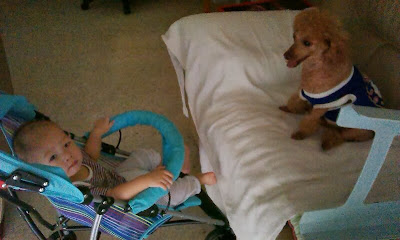 2) The dog keeps an eye not to let baby G near grandpa's hot bowl of curry-mee or the dog also wants a sip of grandpa's curry mee soup? 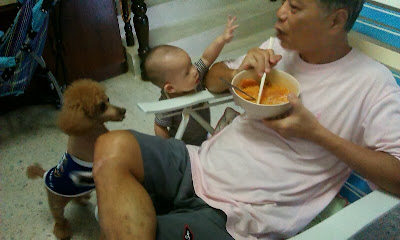 Posted by Princess Ribbon at 07:56