Just The Two Of Us & Butter Cookies (With Dried Fruit)

Just the two of us yesterday as Baby G was at grandma's place, whereas the hubs was working, sigh. Well, not a bad thing afterall as I got to spend quality time with Kenzie boy.

Took him to the coffeeshop in the morning for breakfast, but I had to make it fast because he started getting restless and demanded for this and that after he finished his breakfast. Handling a restless toddler alone who refused to sit on the baby-chair and kept wanting to climb out of it while I was trying to finish my breakfast wasn't easy. Ended up I did not touch my breakfast, and left. Why?

Because: I was sweating all over my (pretty) face and body, my one hand was holding my glass of "leong sui" for Kenzie to suck (using straw), spilling here and there, my other hand was scooping up noodles using a spoon (yes, spoon, whatever I could grab hold with) to shove in my mouth (and my nice strands of hair kept "soaking" in the hakka mee gravy). And I need to takecare of the diaper-bag (with my wallet and tablet inside) which I put behind my seat. There was also a thermos with hot boiling water inside and when I leaned on the bag, gawd, I was sweating profusely already! Then, my handphone was beeping non-stop with whatsapp notifications (from my mum) and I had to check it just in case they were anything important. I could feel everyone in the coffeeshop was staring at me pathetically and thinking, "Poor little old fella, have to handle the cranky kid alone on a public holiday, where's the hubby?"

Before going to grandma's place, we detoured to the hypermarket because I wanted to get something for my cookies. It was a fast process (and I had to be fast) because I already had in mind what I wanted to buy. I promised Kenzie boy if he was a good boy, then I would bring him for ice-cream. So I had to honour my word. Took him for an ice-cream treat before going back to grandma's place. 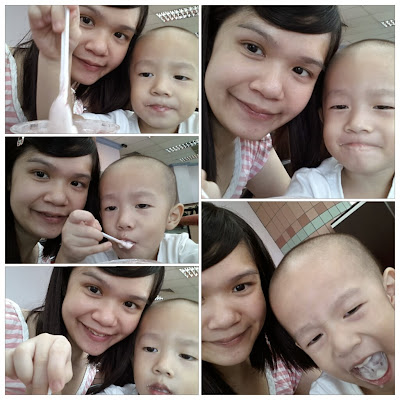 After spending some time at grandma's place, we left in the afternoon and before heading home, I drove-thru McD and got him a Happy Meal. He was quietly munching on chicken nuggets (and drinking Milo) all the way home. Reached home and I prepared the rascal for his afternoon nap. His battery has gone flat from walking and playing and eating (and travelling) from morning til afternoon.

Now I have all the time (and peace) in the world to bake my cookies. This is a very simple and basic butter cookies recipe which I got from my dad. Nothing else but 1, 2 & 3. Yes, 1 cup sugar, 2 cups (I used Emborg brand) butter and 3 cups flour. I assumed 2 cups butter = 200g butter. It worked. 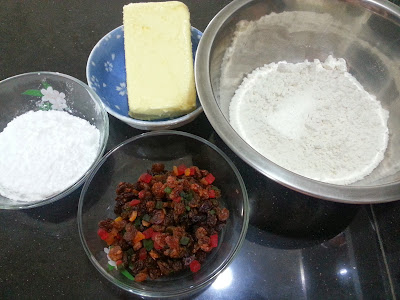 I mixed everything using my hands until it formed a firm dough. I pinched some dough and rolled into balls, then  pressed down lightly as I do not have any fancy cookie cutters. Topped with dried fruits (optional). 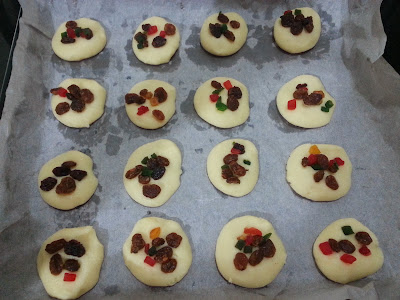 Baked at 180 degrees for about half an hour. It was delicious and tasted like Danish butter cookies! 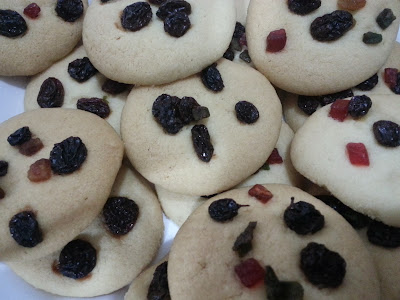 Later in the evening, I made egg-mayo sandwich for Kenzie boy and also added other goodies on his plate for dinner. He did not eat much because his tummy was still full from all the nonsense food he had in the morning. He only finished the cheese, papaya and egg. 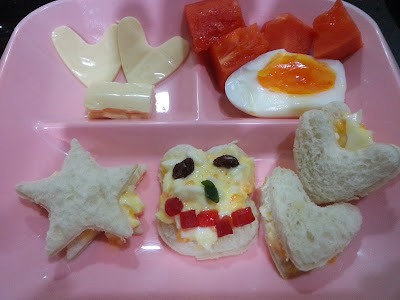 Posted by Princess Ribbon at 08:59