Maceroni And Sardine Puffs For Dinner

Again it was a public holiday yesterday so I had mood to cook dinner again. Maceroni and puff again as the bag of half-full maceroni is still in the cabinet. But this time, I did not put the puff on top of the maceroni as I bought another two packets of puff pastry when I went for grocery shopping during the weekend, so I can make more puffs rather than just layer two miserable slices on top of the maceroni just for the sake of finishing it previously.

Anyway, here was what I cooked: Sardine puffs with mayo and baked maceroni with brown sauce.

The sardine puffs - I used:
5 slices of frozen puff pastry (I used Kawan brand)
1 small can of Marina sardines (gravy drained)
Japanese mayo (I used Kewpie)
Some chilli sauce
Spread mayo and chilli sauce on the thawed pastry, followed by a spoonful of sardines. Fold according to preference. Bake at 200 degrees until puff becomes golden brown. 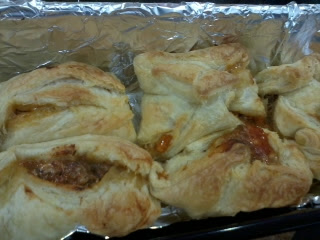 The baked maceroni with brown sauce - I used:
5 handfuls of maceroni
2 white onions, diced
2 tomatoes, diced
Minced meat
1 packet of meatball gravy (I used Ikea meatball gravy)
Salt and pepper
Boil maceroni. In a saucepan, cook the brown gravy according to the instructions given on the packet. Put aside. In another wok, fry onions, tomatoes and minced meat in olive oil. Pour the maceroni into the wok, mix in the brown gravy, stir, add pepper and salt to taste.
Scoop half the maceroni into a caserrole, layer with cheddar cheese. Scoop the remaining maceroni and layer with more cheese on top. Bake at 200 degrees until the cheese melted. 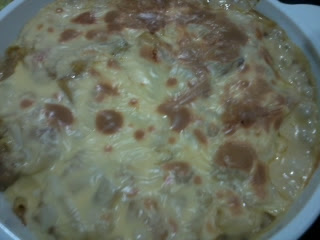 Posted by Princess Ribbon at 08:04