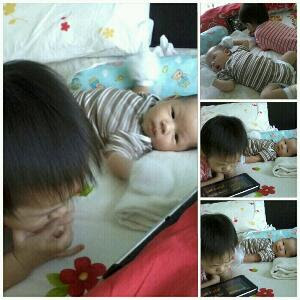 I have a confession to make. I hate fear Saturday morning very much and that is the time I (secretly) wish Kenzie is at the nanny's or sleeping over at my mum's place. My hubby works halfday on Saturdays and will only be back around 2pm. So I am left alone with two of them and time seems to pass very slow during the daytime. Kenzie usually wakes up around 8am (sometimes earlier). I will bathe him, prepares his breakfast and let him watch tv/ play the tablet until his naptime which is around 12pm. As much as I hate letting him watch so much tv and youtube, I have no choice. The earlier he gets up, the more I dread as time will pass more slower and I need to entertain or find activities for him to do longer. Not to mention, it's getting hard to make him sleep now, unlike previous times where he will just sleep when he sees me sleep as well.

I have to bathe two, feed two, entertain two, put two to bed, check two of them in different rooms at the same time (I can't put baby Gavin on the same bed when I am making Kenzie sleep as he will jump on the bed), and when one finally asleep, the other wakes up or doesn't want to sleep, when one cries the other one wakes up, the list goes on.

I used to say I hate to work and only like to stay at home to be a housewife and takecare of my kids. But sometimes I wish to start work soon as working is the only time and place for me to dress up, eat out and take a breath. At least nanny takes over 50% of the day. Currently I still have about 3 more weeks maternity leaves and everyday I look haggard - hair up with my hairband and in my pyjamas without bra.

Posted by Princess Ribbon at 08:06