I have personally tried the followings to both Kenzie and Baby G for:

1) Mild fever (> 37.5°C, but < 38°C) - slice a few lemon pieces, put under the feet, covered with socks. Tried on Baby G (mild fever after his monthly jab). Fever subsided the next day. I wouldn't say it was because of the lemons because mild fever will still subside and be gone the next day or so, right?

2) Flu & blocked nose - Slice onions or lemon pieces and put in a bowl next to the kid. Tried on Kenzie when he was having flu+blocked nose. Onions didn't work and the whole house smelled terrible. Tried lemons immediately and he could sleep through the night with no difficulties in breathing.
Then tried on Baby G the other day with sliced onions. This time, it worked. Blocked nose was cleared after just 1 hour, and flu fully recovered the next day!

3) Cough - steamed oranges (only applicable for toddlers above 1.5 years old, in my humble opinion)

Oh, let me tell you first. The methods above were all based on other mother's own experiences which I read from the forums I joined in the internet. It may work for some but not to others. If symptoms persist and you can't stand it, consult the paed or buy medicine from the pharmacy. Else, just leave it and let it heal by itself.

*I usually only bring the kids to the paed when there is a fever of > 38°C. Else, for flu or cough (if it's not serious and I'm not bothered with the runny nose, midnight coughing+vomiting+phlegmy voices and all, I let it heal by itself or try natural remedies.

Here was what I did last week for Kenzie's cough. I cut open the tip of an orange and poked holes on the flesh using a fork. Put a little bit of salt on top so that it will be absorbed into the flesh easily while steaming. Steamed for half an hour and let Kenzie eat both the juices and flesh of the orange.


It worked for him. Ate for two nights in a row and the cough subsided significantly. Note: Might work for some and not work for some. Different people, different results. Go to the paed if you are impatient
and do not believe in natural remedies. 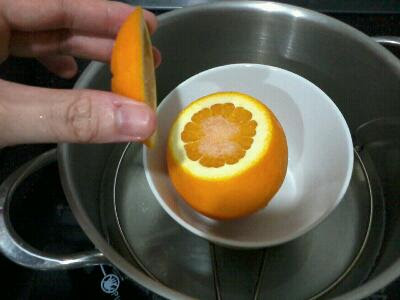 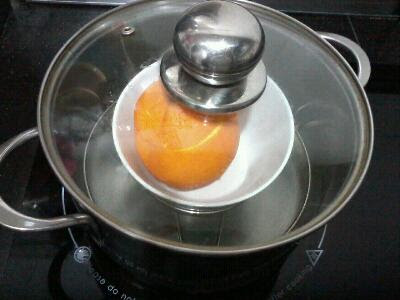 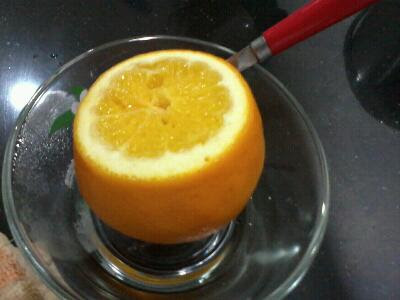 Posted by Princess Ribbon at 08:54